The Season to Promote Behavioral Health

Finding Light Through the Dark

When do suicide rates go up? According to both the CDC and the University of Maryland School of Medicine’s Department of Psychiatry, late spring and early summer are when most people attempt and commit suicide. Since 1999 suicide rates have risen 30% and it remains the second leading cause of death for ages 10 – 34.

The light of the season. The dark of winter. A juxtaposition, both internal as much as external, that rages in all of us.

The laughter from the unaware young overtaken by the despair of a first Christmas without a parent. The joy of spending time with loved ones and the suffocating anxiety of corralling their political opinions around a table. The merriment of watching those you cherish unwrap packaged goodies and the financial stress of paying for the damned things. Oh, how pretty the snow is as it falls, but terrifying as it freezes on roadways…

The holidays are a perfect dichotomy of happiness and sadness. Use this to your advantage and ask community members if the holiday bustle is the cause of their blues. If spring is when most people decide they’re out of options, it is imperative to get them screened and seen before an issue becomes a death sentence.

Behavioral health impacts all of us. If you know five adults, statistically one of them is probably living with a mental illness. Medicom Health wants to help you help them.

Between now and the end of the year the price for the Depression and Anxiety health assessments package is reduced to make it easier to add these tools to your campaigns and reach those who might not know they need a hand.

Michael Venske is busy building and growing customer relationships by providing either creative collaboration for marketing campaigns or support and guidance for Medicom's suite of health risk assessments. Other specialities include: idea generation, bad puns, and speed walking. 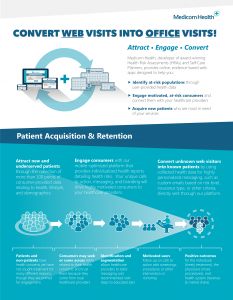 Get Ready! How the Digital Patient Journey is Changing

Thank you for subscribing to Medicom Health News.

Make sure to also visit our features for you and features for your users page in order to see the real power that our HRAs can provide you and your organization. Acquiring new patients has never been easier.