About thirteen years ago, my dad Jim struggled with his diagnosis of prostate cancer. Of course, we were all more than a little scared and concerned for him. I can remember at the time that he also struggled with finding proper information for various treatments, and quite honestly, even with finding a physician and hospital that he felt would look out for his well-being.

Over the better part of a year, my dad worked tirelessly in his search for support and answers before finally making his treatment decision. The good news is that his diligence paid off.

This is his story:

The urologist who did the biopsy recommended I choose one of several treatments for prostate cancer and he described the pros and cons of each. He recommended that I make a decision in a week or two. I was very concerned by the severity of the cons (erectile dysfunction (ED), incontinence and possible damage to surrounding organs) and it was hard to make a decision with the information he provided. So, I started scouring the Internet looking for a silver bullet to reduce my concern over the cons.

I consulted other doctors to get additional opinions. Their recommendations were pretty much the same. The surgeons recommended surgery and the radiologists recommended radiation. No silver bullet. The only positive thing that came out of that effort was one of the urologists suggested hormonal therapy to slow down the cancer to give me more time for research. That was a tremendous relief as trying to make a life altering decision in just a couple of weeks was nearly impossible for me.

Over the summer, I found a prostate cancer support group facilitated by a retired doctor who was also fighting prostate cancer. Up to that point, trying to find someone in the medical field that I thought was neutral in sharing advice had proved unsuccessful. The support group doctor had personally experienced many of the treatments over the 11 years since his cancer was first diagnosed as stage 4. He readily shared his treatment results and side effects with members of the group. No recommendations, just facts, support and encouragement. Many others, in the group of over 80 members, described their treatment choices, results and side effects too.

I eventually decided to have a radical prostatectomy. The second challenge was finding a surgeon who had a good track record and did long-term follow-ups on patients. Several I talked to only did the surgery with minimal to no long-term follow-up. They did not provide any of their statistics for the two major side effects of ED and incontinence. Their attitude was that if there were side effects, someone else would take over the problem. They were mainly focused on just removing the prostate and a comfortable margin beyond that organ.

I finally found a surgeon who tries to minimize side effects and does long-term follow-ups. He pioneered a nerve-sparing process for prostate removal and educated other surgeons about his process. He also expected recovery to be many days less than was normal for others who did for this type of surgery. So, in November of 2004, I underwent the surgery with a quick recovery, as he expected.

One of the reasons I chose radical prostatectomy was that, if they did not get all of the cancer removed, I could get a second treatment of radiation. It turned out I needed radiation, because one-and-a-half years after my surgery my PSA started showing a recurrence. I was treated again by radiation in 2007.

Almost 13 years later, I am still free of prostate cancer, so I believe I made the right choices.

Over the years my dad continues his annual check-ups. It usually is around his birthday and we always celebrate his excellent results and another year of good health. He and I have discussed the fact that when he was first diagnosed, there was much less in the way of help that was easy to find for those searching for information about prostate cancer.

Health assessments were new and not widely adopted at that time. My dad has said that he might have had a bit more confidence if hospitals had provided information about prostate cancer more readily. I’m proud that the work that we do at Medicom Health provides hospitals with products that exactly fill the need for consumer health information. I also hope these products help many other ‘dads’ out there become aware and informed so that they can share the same outcome and story.

To this day, my dad continues to go to his cancer support group meetings. He freely shares his story and research with others who have been recently diagnosed – many of whom are obviously worried and don’t know where to begin – and feel much as he did so many years ago. Yeah, that’s my dad… He’s my hero!

A resource that Jim recommends is: https://www.ustoo.org/

The photo above is Jim at the at the Arctic Circle in 2018 after riding his Harley from Minneapolis to the top of the world (for the second time).

Isaac began with Medicom Health in early 2001. Over the years he has helped with the development of client healthcare applications. Applying his passion for programming, animation and design he uses this experience for the many needs of both customer and company alike. Today Isaac helps create and manage the corporate website along with internal and external marketing communication initiatives. In his spare time, Isaac plays guitar, bass, and loves to create experimental sounds with computers. 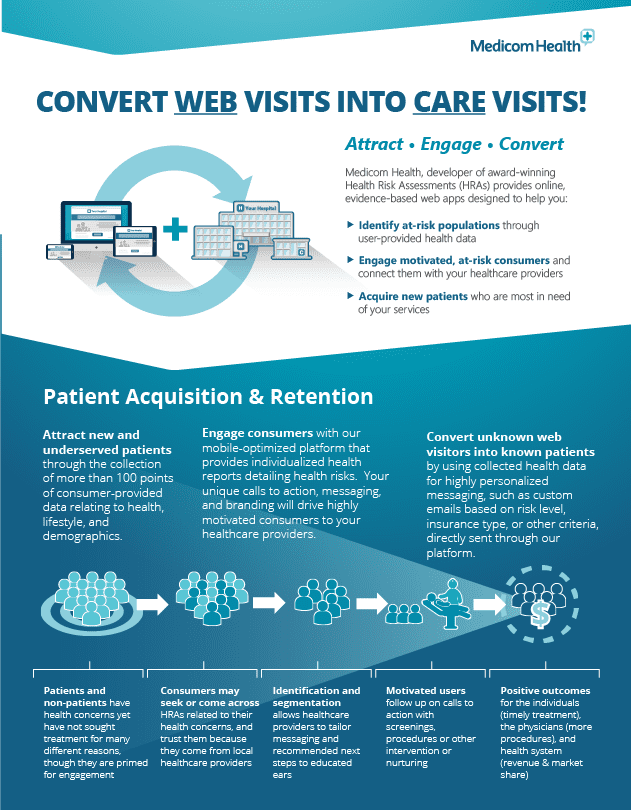 We wanted a strong interactive call to action for our marketing campaigns and the Medicom HRAs have been a great solution to increasing our response rates. The risk assessments provide us a way to capture contact information and determine risk level to follow-up with risk-based emails.

By providing more personalized content, we direct people through our marketing funnel and have taken our campaigns and results to the next level. Because of the trackable results, we are using the Medicom HRAs across our 11 OSF HealthCare hospital markets and for numerous disease states.

We Want to Showcase Your HRA Success!

Ten (Stupid) Reasons You May Lose New Patients And How to Easily Prevent It!

We are waving our 1-time fee for new customers for a limited time.
We typically charge $25k to health systems for a 3-yr. service period.

Rx Savings Assistant® has no ongoing costs for providers.
Pharma manufacturers fund the discounts. We receive a small commission for each discount used. There is no impact on pharmacy profit margins.

Health systems do shoulder the cost of the IT implementation.
This includes paying for any additional EHR data feeds if necessary.